This section allows you to view all posts made by this member. Note that you can only see posts made in areas you currently have access to.

General Discussion / Re: Request for comments on newer Inverter + Converter

« on: March 29, 2022, 08:01:19 am »
There is some great info here as I am also looking to upgrade my inverter and converter and eventually go lithium batteries. My question is where to go to get the best product and installation... a solar company or a reliable RV repair shop? Swapping out all that electrical is not something I feel comfortable doing, and I know my poor knees will complain more than it is worth.
Also, should I be swapping out the 12 year old 90 watt solar panels at the same time?
Thanks for all of the amazing knowledge this forum provides. What a wonderful family.
Dougn
2

« on: March 02, 2022, 04:34:38 pm »
Curses, mag-chloride!
I have a hot water bib in my driveway. I hook a regular lawn sprinkler and hose to it spread under the vehicle and slowly drag the hose from one end to the other. Repeat a few times and it looks good, and you stay dry.
6

General Discussion / Re: Do you know anyone who wants to buy a PC?

Anyone have a closeup picture of the new Ford E450 (2021 and later with 7.3L V8) with a 10" Garmin RV Vieo 1051 radio?  I'm considering the purchase of a used 2021 PC2552 built on the new Ford E450 chassis.  It appears to have been built before Phoenix started installing the new Garmin RV Vieo 1051 and it has the stock Ford radio with no display screen.  The dash also appears to be a single DIN slot, so options for a replacement radio are limited.

Apparently, new orders from Phoenix come with the Garmin RV Vieo 1051 radio which is a dock system and 10" removable display/tablet.  When looking at Garmin's specs for the Vieo dock, it appears to be a double DIN unit.  I'm curious what Phoenix has done to modify the dash to accommodate a double DIN radio/dock.

Is it possible that the little storage cubbie under the radio is removable with the radio to create a double din size.

I just confirmed moments ago that the 12V outlet in the cabinet to the right of the main TV is powered by the house batteries, not the chassis battery.  You can monitor your house batteries from there using one of those 12V socketed volt meters.

I originally monitored our house batteries that way but wanted the information more "in my face", hence the panel mounted volt meter. 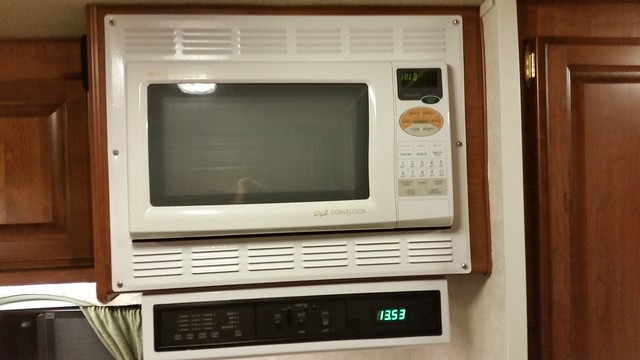 Thanks Ron for the link.  A most likely stupid question, but what is the difference between the two-wire and three-wire option?
Thanks in advance

The temp and clock are over-rated features that I never display.  I always display the voltage.  I found just the volt meter in 3 different colors SOLD HERE ON EBAY.

« on: January 01, 2022, 10:15:06 pm »
Thanks to everyone for the advice and ideas. I have basically left the inverter breaker off because we are shore powered at a friends place in Tucson. I've been busy the last few days replacing the cooling fan in my HP laptop...You have to take the whole thing apart to get to the fan, the absolute opposite of logical.  And they are ten times easier to take apart than put back together.
Now that I'm back online it is on to the inverter, take it out and clean and check connections.
Since we have solar, and I hate generator noise, and are rarely at places with electricity, I'm inclined to do the upgrade to pure sine wave and lithium battery. I'd love to have a microwave working off of batteries.
10

Wow that looks like a fire waiting to happen. I would imagine you are overloading the inverters relay pass through relay.

agreed.
Anybody have any suggestions on a good compatible pure sine wave inverter to replace this with. The house batteries are who knows how old, should I be thinking about switching to lithium at this point. We mostly boondock.
11

2nd question first... Because the inverter supplies the kitchen gfi, bathroom gfi, TV outlets and outside 120v outlets via its "rollover" switch that selects shore power or inverter power (the default) for those outlets.  That rollover works on 12v DC.

Thanks  that all make sense. I never turn the inverter on unless I'm going to actually use it. I do see now that with the inverter breaker off that the only 110 outlet usable is behind the driver's seat.
I also discovered while looking under the bed this heat warped cover plate... that can't be a good sign.

« on: December 27, 2021, 01:10:28 pm »
The radiator type heater is a nice thing to have and take long if you are going to be cold weather camping where you can plug in. But you don't really need it with all that you've done so far.
I'm in Colorado have always only blown out my RVs and have never had a problem with temperatures going below zero.
13

« on: December 27, 2021, 11:40:20 am »
Put some antifreeze in each drain so there is some in the p-traps including the shower, run enough so that there is also some in your gray tank. You should also make sure that some gets to the macerator so use enough till you see pink coming out.
Since it appears you can plug it in and use a space heater, and I recommend a oil type radiator, you can also turn on the holding tank heaters if you have them.
Also open the cabinet doors at the sinks won't hurt. And a little bit of water won't hurt anything as long as there's room for it to expand as is the case in the water heater where it's impossible to get all the water out.
14

And to all, a Good New Year!

General Discussion / Still here and now with a inverter question

I'm still here, been lurking in the shadows. Thought I had a buyer twice but they didn't want to give me what I feel it's worth. And I'm really glad I didn't sell it and downsize to a small pull-behind or conversion van. Even happier is Sue and the two dogs and the cat since we're living in it for a month or two in Tucson.
>:(And you thought you were rid of me

So the inverter fans have developed a mind of their own sometimes running normally and other times, usually in the middle of the night, making quite a racket until I give a good hard slap on the panel it is mounted to under the bed. I recalled from other previous posts to just turn off the breaker to the inverter at night.
My question...is there any reason to even have the inverter breaker turned on until you actually want to use the inverter say for the TV or other outlets when not on shore power?
I'm sure I'm missing the obvious.
Dougn
PS
I just discovered one oddity... with the inverter breaker turned off the GFI outlets in the kitchen and bathroom don't work. Second question why would that be?
Pages: [1] 2 3 ... 26